Texas Mission and a sneak peak! 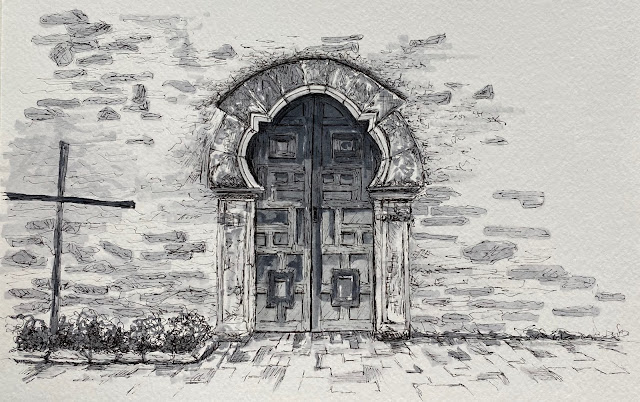 One of my favorite chapters in Michener's TEXAS was about the founding and the history of the Missions scattered across South Texas, particularly around San Antonio.  I haven't visited them in person yet, but when I do, I'm sure that will be followed by a new series of art.
This Mission, founded near Weches, TX as San Francisco de Los Tejas in 1690 by Spain was built to convert the Native Americans to Christianity with three priests and three soldiers assigned to the task.  It was moved to the San Antonio River in 1731 and renamed San Francisco de La Espada.  The church was completed in 1756 and is one of four Missions in the San Antonio Missions National Historic Park.
The shape of Espada's doorway is unique and over the years many theories have tried to explain it's distinctive shape:  Moorish-influenced design, a scaled back adaptation to budget changes during the work or mistaken assembly by masons who were not the original stonecutters.  I like #3 the best... can't you just imagine these masons trying to put this together like a puzzle without a plan?
I did this sketch last fall, but have adapted it a bit and added some color for my 2021 Lent Series starting next week! This will be my 5th year to post for Lent and I have all new artwork ready to go.  I am excited to share it with you! 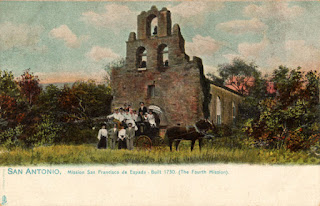 Posted by B J McGregor - Art and Illustration at 6:00 PM