"Go therefore and make disciples of all the nations, baptizing them in the name of the Father and of the Son and of the Holy spirit, teaching them to observe all things that I have commanded you, and lo, I am with you always, even to the end of the age." 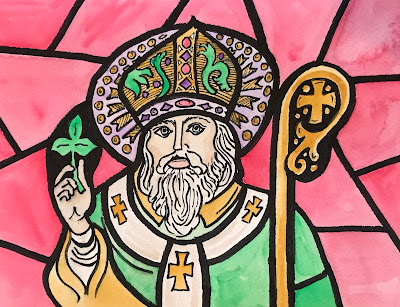 I'm sure St. Patricks day conjures up some images in your head like it does mine...
Green Beer, Shamrocks, and a good reason to party!
Since this day of celebration falls during lent, I thought it might be interesting to know...as Paul Harvey would say "the rest of the story."

He had a fairly average, unremarkable and not highly religious youth until he was 16 year old and then was kidnapped by Irish pirates and sold into slavery.   There he herded sheep (sound familiar?) in northern Ireland, thinking this was punishment for his lack of faith.  Given the opportunity, six years later he escaped and returned home to his family, to live a more religious life!  Soon thereafter he had a dream of being called back to Ireland to tell the people about God.  Feeling unprepared for this, he studied at a monastery in France and 16 years later, with the blessings of the Pope, he returned to Ireland as a priest.

For the next twenty years he travelled all over Ireland, baptizing people and establishing monasteries, schools and churches.  He used the shamrock, commonly found in the countryside to demonstrate the Trinity; Father, Son and Holy Spirit to the people he met along the way.  Perhaps they celebrated with green beer along the way too, no one is quite sure!

He died on March 17th, 461 (or 478 depending on the birthdate) leaving behind an organized church and island of Christians.  This date has been commemorated as St. Patrick's Day ever since!

Posted by B J McGregor - Art and Illustration at 5:00 PM